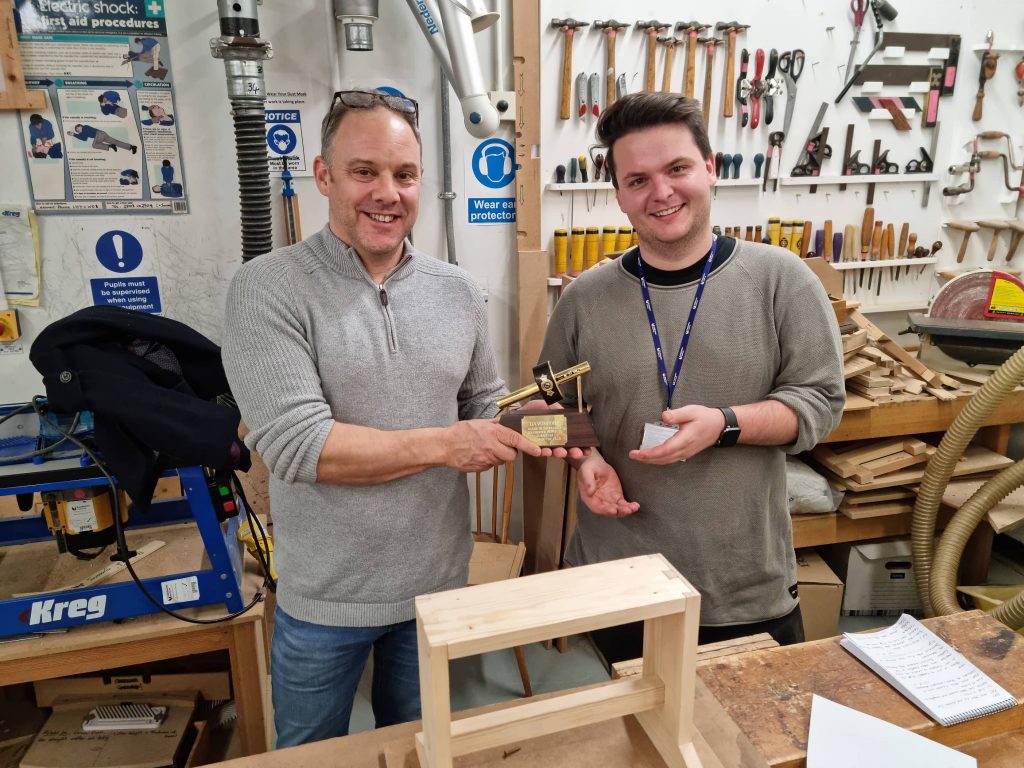 Colchester Institute furniture making student George Davey has won the first ever ‘Davonport Gauge of Excellence’ award. He received the new handmade trophy, designed and made in the Davonport workshop.

Set up in partnership between the Colleges Wood Occupation’s department and Davonport, the award will be run as an annual competition for the Colleges Furniture Production students.

Up and running for its first year, the award was open to all students on the Furniture Production programme. The competition involved a 6-hour task, where the student’s woodworking skills were put to the test, creating a footstool combining dovetail joints as well as mortise and tenon joints.

2022 award winner George Davey was delighted to be the first winner of the award. “It was quite a challenging task and I was up against seven other great furniture makers.”

Richard Davonport, the Founder and Director of Davonport, presented the award. “We have been working in partnership with the College for several years now, supporting and nurturing young talent of the future. However, this year I wanted to take it to another level and mark the partnership with an annual award.”

Head of Wood Occupations and Associated Trades, Chris Coe spoke highly of the award. “Davonport are a leading company in Colchester and already recruit a number of Colchester Institute students, either part time whilst studying at Colchester Institute or full time, once our learners have successfully completed their studies. By having the ‘Davonport Gauge of Excellence’ award, the learners have something to aspire to and is also a reward for the outstanding work they have done.”

Why green kitchens are one of 2023 hottest trends

Green kitchens have been growing in popularity over the last couple of years, whether through…

Aesthetics are of key importance when selecting new appliances: a sleek induction hob will give…

Have you got plans to celebrate the Queen’s Platinum Jubilee?  Whether you’re attending an organised…